Months after the sales of smartphone business to Microsoft for $7.2 billion, Nokia is making a comeback into gadget market by launching a new an android tablet, Nokia N1.

Yesterday Nokia tweeted a cryptic message with a black box and talked of something new. At the Slush 2014 conference in Finland, Nokia launched Nokia N1, a new tablet which runs on android. Nokia N1 has a 7.9 inch screen and 2048×1536 resolution. This tablet is crafted from a single piece of anodized aluminum, just like iPad mini.

• Micro-USB 2.0 with a Type-C reversible connector, one of the first implementations of the reversible type-C USB connector 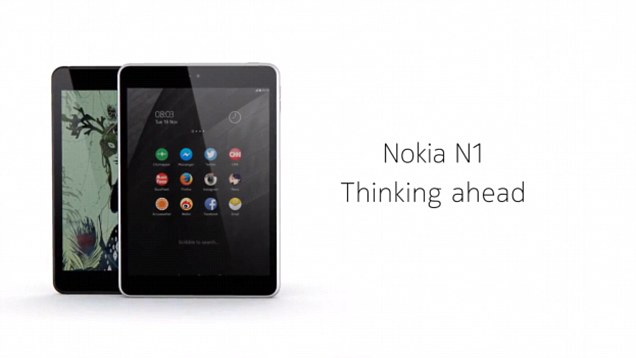 The operating system in Nokia N1 is a stock version of Android 5.0 Lollipop. This features the Nokia Z Launcher as its default user interface.

Z Launcher is based on gestures that lets you write letters on the screen, this gives you list of apps and contacts and it changes on the basis of your location and activity.

“We started looking around, we just didn’t find any good Android tablets out there,” says Brook Eaton, director for Nokia’s Z Launcher. He adds, “We have such a beautiful, simple, and elegant Z Launcher. Why not build a device that is also built on the same principles as being super simple and easy to use and elegant?” Nokia Z Launcher is also made available as a separate download to all Android devices starting from today.

Nokia is now planning to launch the Nokia N1 in China for $249 (before taxes) at the time of Chinese New Year (February 19th), and it will roll out to Russia and some European countries after the Chinese release. This an impressive and aggressive price against Apple’s $399 for the latest iPad mini 3 and the $299 price of the iPad mini 2.

Nokia’s Head of Product Business Sebastian Nyström described the company’s journey after the mobile business was sold, and emphasised that big change also brings big opportunities. Nyström started his presentation with a quote which seems pretty accurate: “They say Nokia is dead – they couldn’t be more wrong.”