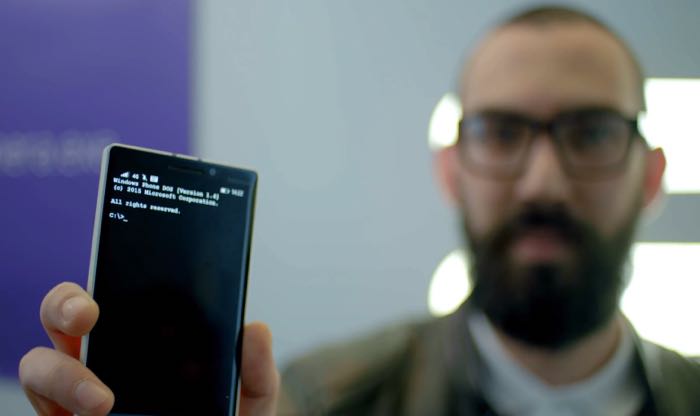 Microsoft is going old-school and today it launched a new OS designed for Lumia smartphones – MS-DOS Mobile. When I came across this news on Windows official blog, I knew it was something related to April Fools’ Day. Reading further, I came to know that it’s something in reality. Microsoft has spent a considerable amount of time to develop this and it shouldn’t be exactly called an April Fools’ Day “joke” because an app exists in reality. This is one of the most elaborate April Fools’ pranks I’ve ever seen and it’s a bit closer to the reality.

Microsoft has tried like anything in the past to make its Widows Phone OS more popular among the masses and it is another effort in the same direction. In the launch video for MS-DOS Mobile, Microsoft says:

“Today Microsoft launch MS-DOS Mobile, a new OS designed especially for Lumia smartphones.
Microsoft are going back to where productivity started for millions of people, launching a beautifully simple OS.

The MS-DOS Mobile preview is an essential download for those who remember life before Windows, those who want to go back to BASIC, or even those looking to boot into DOS for the first time.”

In the MS-DOS Mobile, you can navigate by typing in the DIR and for accessing the directories, you need to use the CD command. Microsoft has designed this app to give you the nostalgic feel coupled with the modern operations. Your beloved C:/ has made a comeback and now you can access DOS, BASIC and more with MS-DOS Mobile.

To make you feel more nostalgic, there is a classic Rock Paper Scissors game and a B/W camera for ASCII or CGA selfies.

Here are some fun commands I found in MS-DOS Mobile:

VER: Displays you the MS-DOS version

A: Type A: to go all the way back to the floppy disks

Download the MS-DOS OS app for Lumia phones from the link below:

Did you like this April Fools’ Day “Gift” from Microsoft? Tell us in comments!
Stay tuned for latest technology news from fossBytes!