Is Mercedes-Benz F 015 Luxury in Motion Concept the Future of Mobility? Ever since the car was invented, people have wondered, when it would be able to drive itself and they could go about their business while travelling. This thinking has made great progress in this century with ever increasing number of driver aids like parking assist, lane recognition, attention assist. Apart from these, there also have been numerous concepts of completely autonomous vehicles from Google, Volvo, Audi, Tesla etc.

At the Consumer Electronics Show (CES)-2015 held in Las Vegas earlier this January, venerable manufacturer, Mercedes-Benz revealed their concept of what could potentially be achieved by an autonomous car. The concept, called “F 015 Luxury in Motion” made a rather dramatic entrance to the show by arriving at the Cosmopolitan Hotel, in front of hundreds of waiting eyes, without anyone driving.

Early vehicle interiors were simply instruments necessary for the driver to drive. As more features, accessories and seats were added to the compartment, the focus still stayed on the need for the car to be driven by a person. The ideology behind the F 015 was: since now we have developed the ways to overcome that need, why do things the conventional way. So, since the car can drive itself, why not use the cabin for relaxation, business and enjoyment. The F 015 does just that.

The compartment has a cavernous lounge-like space with a walnut wood floor, 4 Nappa leather seats and glass and shiny metal surfaces. The seats can swivel to face each other, or anyway the occupant wishes. For easy access, it features wide coach-style doors without a B-pillar and seats can slide out to admit passengers. Inside there are 6 screens for entertainment and control. The touch, gesture and eye-movement based interface is smooth, intuitive and informative.Google’s First Fully Functional Self-Driving Car Prototype 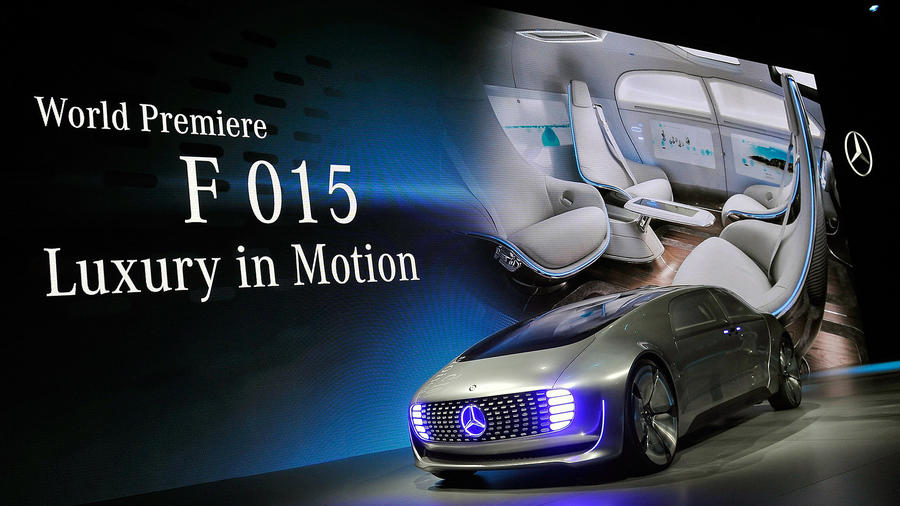 The body is pod shaped and streamlined with smooth curves. The windows are tinted the same silver as the body and the large, flat windshield fuses with the glass roof. In spite of the unconventional and slightly bulky profile, the prominent skirts and haunches give it a dynamic appeal. Like most concept cars, it has an array of lights all over. Lights on the seats, on the dashboard, on the doors, on the grille and on almost any surface on the inside that isn’t covered by screens. It may sound overwhelming, but creates a soothing ambience.

A major feature on the F 015 is its interaction with the surroundings which facilitate safety. It communicates with the pedestrians and the other drivers with the help of spoken instructions and visual instructions displayed on the led displays on the front and rear as well as the laser projection system that projects directions on the road ahead of the car. The headlights change colour based on the driving mode-blue for the autonomous mode and white for the manual which might be useful for pedestrians and other drivers who do not wish to trust their lives to technology.

The drive train comprises of an electric motor and the batteries can be charged either by plugging-in or by a fuel cell. The combined range is 1,100 km, which is better than most diesel cars on the market today, without any emissions. The body is a combination of carbon-fiber reinforced plastic, aluminium and steel. The hydrogen tank which is also carbon fiber reinforced and placed between the rear wheels gives an added level of safety, that is often lacking in fuel cell cars, being one of the reasons for their lack of popularity.

However, the promises offered by it still remain distant, as Mercedes expects it to be made public by 2030.

Read more on new advancements in the field of science and technology here on fossBytes.