It’s every artist’s dream to sell out a Madison Square Garden Concert. It is the place where John Lennon performed for the last time, just before he was shot, it is the place where the legendary Muhammad Ali and Joe Frazier face off happened in the ‘fight of the century’ and Michael Jackson’s concert in this arena during his Bad World Tour was voted as the greatest concert ever.

But a foreign politician packing the whole arena in NYC is certainly a matter of interest and astonishment. Tickets for Indian Prime Minister Narendra Modi‘s speech and reception at the Madison Square Garden during his ongoing U.S. visit are sold out. It’s the busiest music arena in USA and one of the most expensive stadium venues ever built. 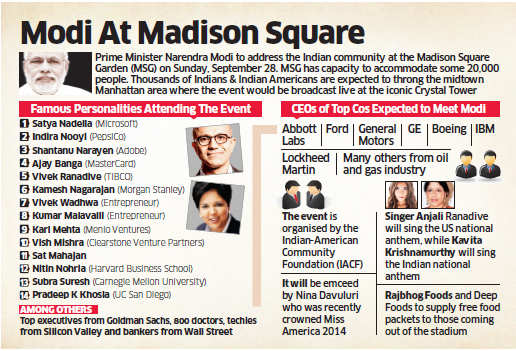 The Indo-American Community Federation (IACF) which is organizing the event said that all the 18,000 tickets, 96 per cent of which have been provided free of cost after a computerized draw of lots, were booked weeks in advance.

Another option for Modi fans is to gather at Times Square around the noon, where his address will be broadcasted live on the big screens.

According to Indian Standard Time, PM Modi’s speech will commence at 8:30 pm. The speech can be viewed on Doordarshan as well as other private news broadcasters. You can also the live streaming of the event by clicking on the picture below if the Youtube video given at the top doesn’t work!